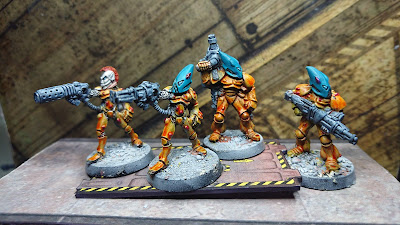 A while ago I purchased a batch of 1st Edition Rogue Trader-era Space Elves. Many of them have now been based and undercoated just in case I found the urge to try painting them up - I'll often grab a mini and try a new scheme or technique on a whim.

Along those lines, one evening I recently painted up these bad boys elves.

In addition to adding to the rank-and-file of my seemingly forever expanding Namreb Craftworld, I think I will be able to employ them as Storm Guardians in Kill Team games - maybe the Flamer and Fusion Pistol options?  The armour plates are a mix of yellow wash and orange ink... it made for an interesting effect.  You also may notice their helmets match the teal body armour of my Swooping Hawks, which ties them nicely into my broader Eldar army.  Also, as my mate Bennie pointed out, a warm-cool colour contrast can be very appealing.  PS if you want to see them in action, here they are in their first battle report.

Also on the Eldar front, I've completed my first Swooping Hawk Exarch.  It was great to be able to stay faithful to my first (test) Hawk's scheme and I've got to say, he looks pretty impressive - those wings really make him stand out amongst the masses.  I've got another half a dozen on the bench, but they're all the next, newer edition sculpts. 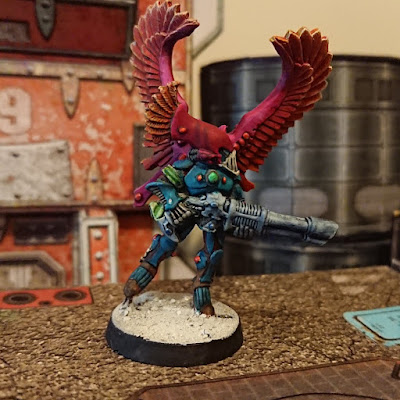 Doing that model I've now learned two lessons: (1) I'm terrible at freehanding stripes and (2) I must let my drybrushing actually dry before attempting a further drybrush layer.  Not to worry, it's a spiffy model all the same.

Email ThisBlogThis!Share to TwitterShare to FacebookShare to Pinterest
Labels: Eldar

Some links of interest...